This is an incomplete list. As we come across interactions with these rules that require a new ruling they will be posted here as well.

• Traits gained via the “extra traits” feat don’t count against the “one per type” limit.
• Services and goods based on providing a service (ie. prepared food, masterwork items) cost 10x the listed price.
• Magic items cost 1/10th the listed price.
• Profession checks will be replaced by day job checks
• All classes get light armor proficiency. Light armor has no spell failure chance. Bard, Magus, and Summoner get medium armor proficiency and can ignore the spell failure from medium armor.
• All classes will have a minimum of 4+int bonus skills per level.
• Vital Strike stacks with Spring Attack, the charge action, and probably anything else that limits you to one attack in a round.
• Manyshot can be used on a single shot or as part of a full round attack
• Combat maneuvers only provoke AOO’s if you fail.
• Improved/Greater combat maneuver feats are combined into a single feat.
• Combat maneuver feats do not have prerequisites.
• Classes with the “weapon training” class feature may select “combat maneuvers” as a weapon group.
• Combat Expertise is no longer a feat, it is now a core feature of the combat rules. Anytime that combat expertise is used as a prerequisite; that prerequisite is waived.

The following items do not exist in this game, however their base spells are still available:

In place of these items all characters will get inherent bonuses as they level up. These bonuses are meant to represent the growth of a character as they gain experience so they are not limited to a particular piece of equipment. For example, if your character has “weapon +1” this gives +1 to hit and +1 to damage on every weapon they wield. 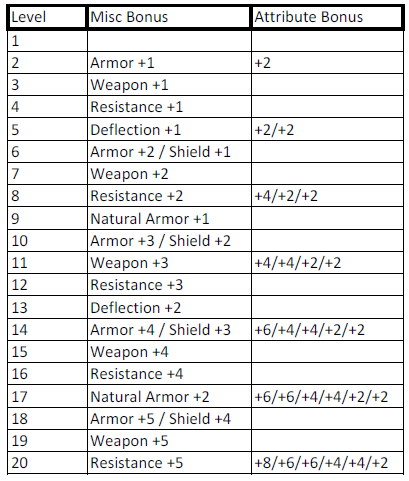 For attributes that progression works where the first number is the attribute you would like most increased, and then proceeds downward. You will need to keep track of which attributes are increased in which order. I would recommend something like STR>CHA>CON>DEX>WIS>INT on the back of your character sheet or on your character page here on obsidian portal.

Ascendant campaigns can view previous versions of their pages, see what has changed (and who did it), and even restore old versions. It's like having a rewind button for your campaign.

We've already been saving your edits, so if you upgrade now you will have instant access to your previous versions. Plus, you get a 15-day free trial, so there's nothing to lose.

I'm sorry, but we no longer support this web browser. Please upgrade your browser or install Chrome or Firefox to enjoy the full functionality of this site.