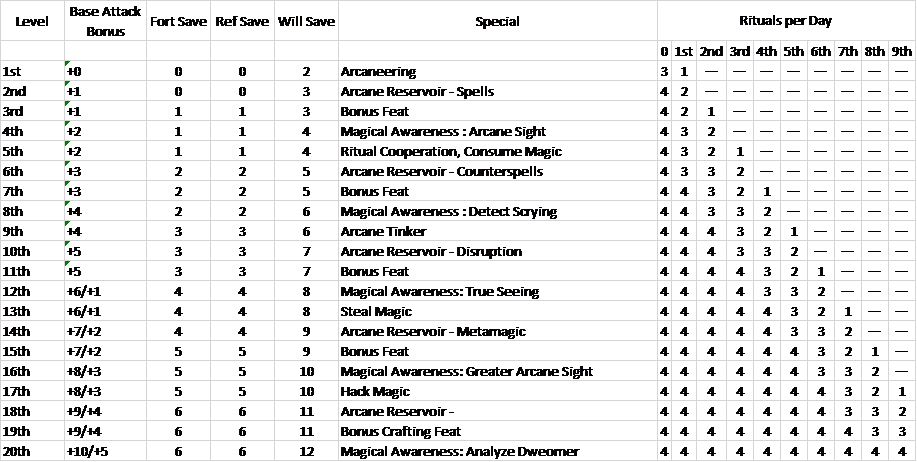 All of the following are class features of the arcaneer.

Arcaneering (spells):
The arcaneer uses magic by performing rituals instead of casting spells. The arcaneer learns spells as a wizard and records them in his own ritual manual. The arcaneer may learn any spell from any spell-list in this manner. The arcaneer may perform these rituals a number of times per day as indicated on the class table. Rituals need not be prepared ahead of time, but instead are performed in intense concentration. To complete a ritual the arcaneer must be able to focus, undistracted, for 1 minute per ritual level. This replaces the normal spell casting time. Once completed, the ritual magic will remain active for 1 hour per arcaneer level. This replaces the normal spell duration. The arcaneer gets extra rituals per day based on his Int. The arcaneer performs three different types of rituals; wards, traps, and foci.

Ritual wards are always centered on a fixed location, but can be any magic which has an area of effect and a duration longer than “instantaneous.” (Example: alarm, darkness, silence, invisibility purge, and antimagic field are all valid ritual wards.) While the effects of many ritual wards are invisible, ritual wards cannot be hidden or disguised from magical detection and radiate the aura of the ritual school and abjuration.

Ritual traps function as “symbol of” spells with the exception that they may be hidden or invisible and that the arcaneer must set special triggering conditions. Ritual traps can be placed on a fixed location or an object and can be any magic which targets a creature or area and has an “instantaneous” duration or is a conjuration (summoning) subschool or conjuration (creation) subschool. (Example: fireball, feeblemind, summon monster IV, create pit, acid fog, and web are all valid ritual traps.) If the ritual calls for an attack roll, calculate the attack roll modifier as (arcaneer caster level + INT MOD + ritual level). Targets who trip a ritual trap without first detecting it are considered flat-footed to the trap. The DC to spot and/or disable a ritual trap is opposed by the arcaneer’s spellcraft check instead of the regular disguise or craft: traps check.

Ritual foci are always imbued into an object. Equipment imbued as a ritual focus can only be used or worn by the arcaneer and take up the magic item spot that they are equipped in. Equipment foci may be any magic which normally has a duration of 1 minute per level or greater. (Example: performing a longstrider focus ritual on a pair of boots would give the arcaneer a +10 feet per round enhancement bonus to his land speed when worn.) Other objects can be whatever the arcaneer chooses and can have trigger conditions set by the arcaneer. Object foci can be any magic which is appropriate for the conditions. (Example: performing an open/close focus ritual on a door could create an automatic door for a public building)

Distruption: At 10th level the arcaneer may use a point from his arcane reservoir to suppress an ongoing spell effect or magic item. The arcaneer must succeed on a dispel check (as dispel magic). If successful the effect or item is suppressed for a number of rounds equal to the arcaneer’s intelligence modifier. These rounds do not count against the duration of the suppressed effect.

Metamagic: At 14th level the arcaneer may use points from his arcane reservoir to manipulate magic. When using a reservoir point to cast a spell he may, as a free action, spend a number of additional points equal to the cost of any metamagic feats he knows to pay the cost of those abilities rather than expending a higher ritual slot.

Something: At 18th level the arcaneer may use points to do cool stuff. Stuff will be explained here when it gets made up.

Bonus Feat:
At 3rd level and every 4 levels thereafter the arcaneer may select any metamagic or crafting feat that he qualifies for as a bonus feat.

Consume Magic (Su):
The arcaneer can consume the power of potions, scrolls, staves, and wands, using them to fill his arcane reservoir. Using this ability is a standard action that provokes an attack of opportunity. When using this ability, the arcaneer adds a number of points to his arcane pool equal to half the level of the spell contained in the item (o-level and 1st level spells do not recharge the arcaneer’s arcane reservoir). If used on a potion or scroll, the item is destroyed. If used on a wand, the wand loses 5 charges (if it has less than 5 charges, the wand is destroyed and the arcaneer gains no benefit). If used on a staff, it loses one charge and the arcaneer gains a number of points to his arcane reservoir equal to the highest-level spell the staff can cast using only 1 charge (if the staff has no spells that require only 1 charge, the arcaneer cannot use that staff with this ability). No more than 1 charge can be drawn from a staff each day in this way. Points gained in excess of the reservoir’s maximum are lost.

Arcane Tinker (su):
Beginning at 9th level an arcaneer can convert existing magical items into magical reagents to pay for rituals or new magic items at their full value (or remaining value of charged items). The entire existing item is consumed in this process even if the value exceeds what is required for the new ritual or magic item.

Steal Magic (su):
Beginning at 13th level an arcaneer can take existing magical energy and claim it for his use. By making a caster level check (DC = caster level + spell level + casting attribute modifier) as a standard action the arcaneer can dispel active spell effects and use the energy to recover ritual slots of the same level. The arcaneer can also use this ability to drain energy from spell completion items, potions, oils, or elixirs.

Ascendant campaigns can view previous versions of their pages, see what has changed (and who did it), and even restore old versions. It's like having a rewind button for your campaign.

We've already been saving your edits, so if you upgrade now you will have instant access to your previous versions. Plus, you get a 15-day free trial, so there's nothing to lose.

I'm sorry, but we no longer support this web browser. Please upgrade your browser or install Chrome or Firefox to enjoy the full functionality of this site.